On our visit to the town of Avilés my friend Laura took us the shop of a friend of hers. The shop is called La dentelle (you can check the website but it is still under construction: www.ladentelle.es). The shop owner, Bea, showed us the place and all the stuff that sells: patchwork, embroidery, felt, beads, books and many other things to make handcrafts. 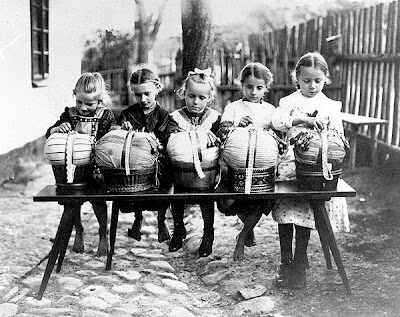 Among all these things one cought my eye especially: bobbins. I remember that I saw or read some time ago bobbin lace somewhere and I thought how difficult that must be! But now, while I was in the shop, I thought that I had the same idea about knitting, that it was something almost impossible and so difficult that I would never ever be able to learn it. Well, here I am now... knitting almost anything I want. Then, why not try some bobbin lace? The worst that can happen is that it won't work so I bought a set of 50 bobbins, some thread, big pins and two books. I didn't but the pillow to work on because I she didn't have the one that I wanted to get so I decided to wait until she gets it to order it on the net.

In the meantime, I started to read about bobbin lace on the internet, blogs, websites, videos in Youtube, etc. While investigating I found a really nice blog that had a little step by step tutorial to make a pillow at home. It is very simple: just some fabric, foam, sand and shoe box. Mine is almost done... I just have to make the show box look a little better but oter than that the pillow works perfectly!

One of the books a got comes with excercises in increasing level of complexity. I got ready to begin with the first excercise, so:


1st step: Prepare the bobbins. Load them with thread: 2nd step: Prepare the pillow. Pin the pattern on it. 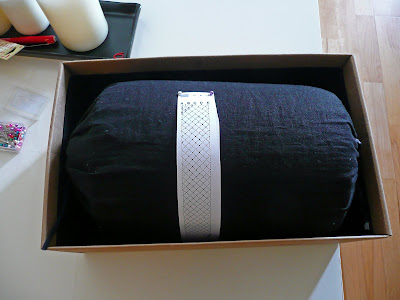 3rd step: Put the bobbins on the pillow and let the fun begin! This first excercise aimed to learn how to make the half stitch. It was so hard but again... this is just a very basic stitch.  I can't stop looking at it and see how the thred shapes so perfectly... this really MAGIC!

If you look very carefully your will find two mistakes I made... but I guess it is alright since it is my first time doing anything with bobbins :)


I am very happy with the result and now I am looking forward to starting with the second excercise!!

About the lopapeysa: It is done!! I just have to graft the underarms, sew the neck to make it double folded and block it! Pictures will come after it is blocked :) Last week I also bought a new toy: A multilens camera. It is a funny camera. It takes four panoramic pictures per frame so it is possible to catch "movement" with it. I am finishing the first film roll during the weekend... next week I'll show how it worked!

This has been a week full of experiments! We made sushi for the first time! I love sushi but never eat it because I refuse to pay the RIDICULOUS price they ask for it here in Iceland. It is unbelievable. So, we decided better to try to make it ourselves and it worked!! Here are some pics of the process: And to end, summer doesn't seem to want to come to Iceland. The last couple of weeks have been pretty cold. The only sign of summer is the light. Days are getting REALLY long. It barely gets dim for a couple of hours which is GREAT! This is a pic I took from home a few days ago around 23.30h... it is just wonderful :) Posted by RodPrjónar at 8:14 PM