A new hat for JB / Advances on the lopapeysa

Again, I will start by going a little back in time... I have already knitted a few hats for JB, so let's see:

This fair isle hat was actually the first hat I ever knitted. It is dead simple. I made it using Álafoss lopi (which is one of the bulky forms of lopi but not the bulkiest one). Of course he loved it... it has skulls, hehe.  I think he used it a lot and the coolest thing about it is that afterwards JB knitted himself two of this! One for his little cousin and another as a birthday present for his best friend. Cool isn't it?

Then I made a hat designed by Stephen West, which is I think the only West pattern that I have used. The result was really nice and what he liked the most about it was the fact that it is reversible. Besides it was extremely soft. I made using a double thread of Drops Alpaca which is a really nice yarn and I totally recommend it :) The, I made a Leethal's Wavy hat. This was a very interesting knit. This was the first hat (and only this far) that I have knitted flat. As every design of Leethal the result is always brilliant! The only thing I regret about this hat is the yarn that I used. I was made with Aslan Trends Bariloche. When I bought it it was amazing to touch... soft and light and the colors were very intersting (a mix of viotet, green and some beige) but after wearing it for a while it became really (and I mean REALLY) ugly. So, I don't think I will use this blend again. So, now the time to knit a new hat for JB had arrived!

Quite a while ago I added to my favorites on Ravelry a super cool hat. As soon as I saw it I thought it would be perfect for JB. I even thought about the perfect colors for it: the colors of his football team (black and white). 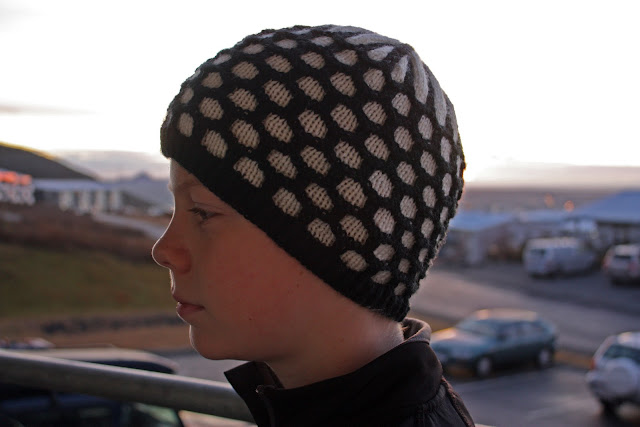 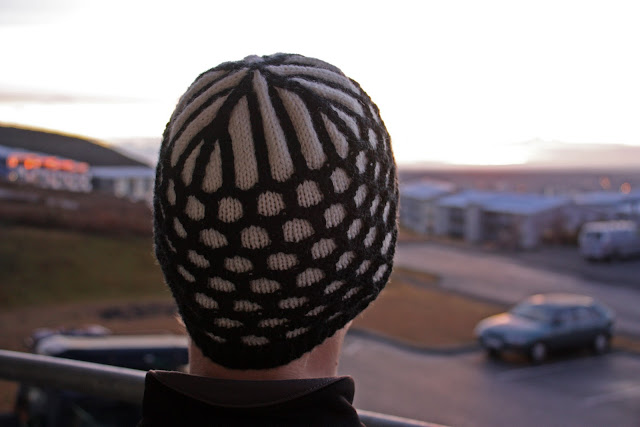 * This is a brilliant pattern. It perfectly written and what I liked the most was the fact that it looks MUCH MORE complicated than it really is. The charts are very easy to memorize.

* I wanted to try the German cast on to see how it was made and how it worked. It was very simple to make and according to what I read it is supposed to be a stronger and more elastic cast on. I am not sure if it is either of those... but it looks good :)

* It is a really quick knit... and that is always a plus!

* This was my first time using Falk (Dalegarn). It is a really nice yarn to work with. It is soft and smooth, the colors are fantastic as well as the price. According to the label it is superwash but I didn't dare to put it  in the washing machine. So I just soaked it in water with soap, rinsed it and blocked it.


What I like the most about knitting hats for JB is that he always wears them A LOT! And that is just enough to make me really happy.

Now, I am planning to make another one like this. A friend that lives in Germany mentioned that he really liked this hat... so there will be a hat flying to Berlin soon!

I already bought the yarn. It will be Falk again in these colors: 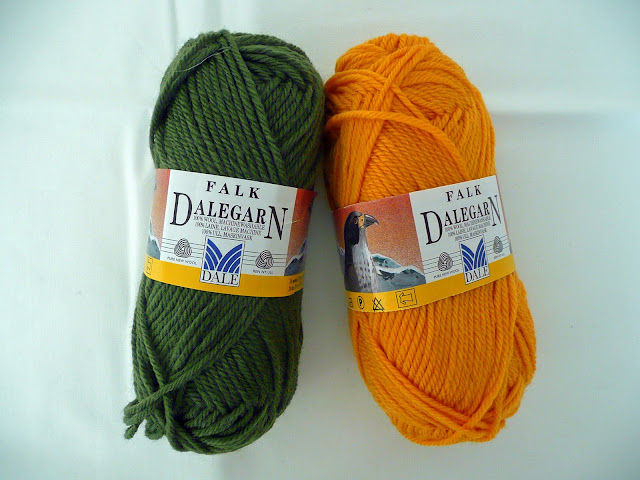 About the lopapeysa I am designing...  I am already done with the sleeves. Actually I am now working on the yoke pattern. It has turned out totally different from what I had in mind at the beginning. I am not 100% sure if I like it.

For now, this is the design I made for the sleeves:

Now, to finish... some pictures of the little trip we took with WonderMike, Franklin Habit and HisKNITS to Reykjanes where we went up to the cliff where this video of Sigur Rós was made: