Needles in a frame and trying to make a pattern.

Remember all the things that Judi sent to me?

Among all the things there was a pair of needles that belonged to her grandmother. A pair of double pointed needles size 3 (3.25mm) and 11" (27cm) in lenght. 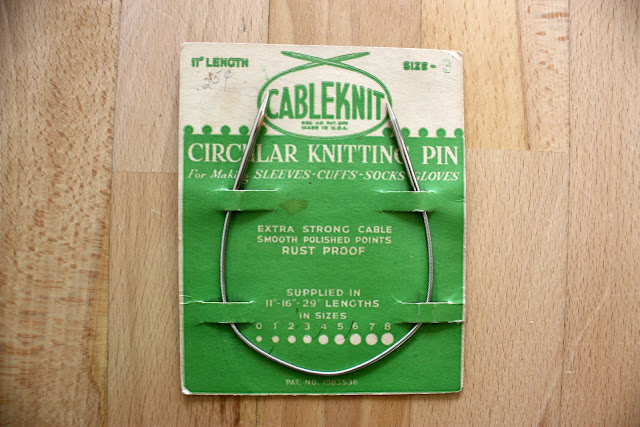 Well, I think it is such a nice piece (almost like a museum piece) that I was thinking that it would be nice to have them framed. To do so I needed to find a nice frame that would honour the beauty of this needles.

Last weekend we went to a farmer's market very close to Reykjavík (in Mosfellsbær) to buy some fresh and locally produced vegetables.

When we were coming to the market and just before entering into the farm I saw a couple of women that were taking things out of their car and putting them on a table. They were probably getting rid of some old things by selling them outside of the market. One of them was very familiar... I actually recognized her almost immediately: it was Hafdís Huld, an icelandic singer (know fro having been part of a band called Gusgus and now for her solo career).
After having bought some vegetables I stopped by to take a look at what they were selling. And yes! They had a perfect frame for my needles! So, I bought an old frame for only 250 ISK (about 2USD)!!

For those who don't know her, this is one my favourite songs and video of her:

A little bit about knitting.

On Ravelry, in the Spanish swap group, a few weeks ago was proposed to make a new KAL and this time it would be to knit a lopapeysa. The KAL was suposed to begin in September but there is a little bit of delay because some of the people who is taking part of it are waiting for the wool (lopi) to arrive (since they made the order on the internet).

In the mean time I have been thinking about what pattern to use for the yoke, sleeves and waist. I really didn't feel like using any from the magazines. I think I have alreadt knitted all myt favourite ones so that meant only one thing: It was time to try to make my own pattern.

With the help of the book Íslensk sjónabók I have been trying to make the charts using paper and color.


It is not as simple as I thought. It is kind of complicated to find the right spots to put the decreases but with some patience I guess I will work this out. I still haven't finished the yoke pattern... I guess i will decide how to finish on the go. I don't know. I will see.

I already chose the colors and decided to begin just to see how the waist pattern would look like. I think it doesn't look so bad at all!


Besides this I am knitting a shawl based on an Estonian pattern and recently me, Gummi and Kristín have started a new KAL. We are now knitting a Hyrna Herborgar (which will my my 3rd!). Which reminds me that I still have to post the pictures of our first KAL (the Aeolian!).

Next time I will be talking abut the new shawl, the new KAL and the old KAL pictures!

Now, I want to hand a few pictures from the southeast... pictures of Vatnajökull, the largest glaciar in Iceland as seen from the road : ) Posted by RodPrjónar at 1:17 PM